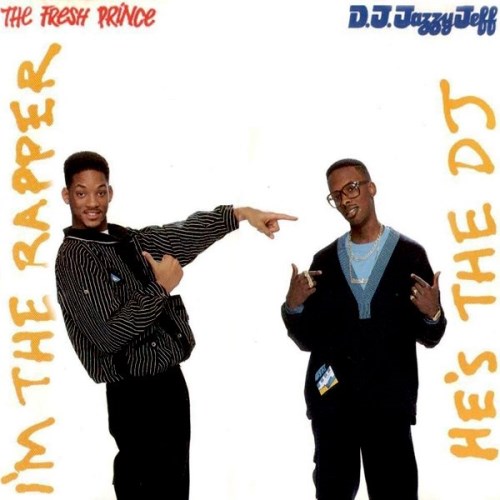 The first album I bought all by myself was DJ Jazzy Jeff and the Fresh Prince’s He’s the DJ, I’m the Rapper.

I got a portable tape player and some cash for my 13th birthday so I stood there in (one of) the mall’s record stores and looked for a very specific album. That album wasn’t He’s the DJ, I’m the Rapper but that was on my list and the stupid record store didn’t have the one I was actually looking for so buy default, He’s the DJ, I’m the Rapper was the first tape I ever paid for on my own.

Years later when the topic of “what was the first album you ever bought” came up and it was my turn to share, I lied and said that it was INXS’ Listen Like Thieves. That was the tape I was looking for when I bought He’s the DJ, I’m the Rapper. Listen Like Theives ended up being the second album I purchased after seeking it out at another record store in the mall.

As a quick digression, wasn’t it great when there were record stores in the mall? And I don’t mean a record store, I mean record stores. As in plural. Those were the days. Back before computers came along and fucking ruined everything.

Why did I lie? Well, that’s easy. I was embarrassed. At the point in my life when I was lying about my first album I was into Glam Rock. Telling my fellow Glam Rock listeners that I bought He’s The DJ, I’m the Rapper willingly would immediately ostracize me. In Junior High you need all the friends you can get and all the friends I could get were the ones who would mock me for my first music purchase if they found out it was a silly rap album. But those guys were dumb. Seriously dumb. I know that now, but back then it was hard to tell the dumb people from the not dumb people.

The first CD I ever bought was Rush’s Presto. But this isn’t about my first CD purchase, it’s about my first ever music purchase and being ashamed of it, if only for a couple years.

By the time I was in college I had pretty much figured out who I was. I was the person who bought He’s the DJ, I’m the Rapper as their first musical purchase. I was the person that listened to whatever sounded good, regardless of what anyone else thought. I embraced that and moved on with my life.

And that’s how it should be. Music is personal. Who gives a shit what you listen to as long as you enjoy it. Besides, there are far more important things to be ashamed about…